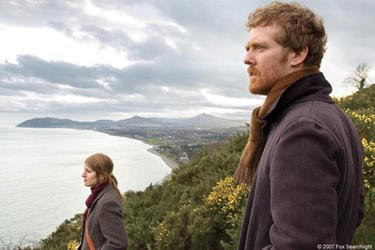 So after waiting nearly seven months for Once to come through our mail slot (via Love films) it finally arrived and after all the anticipation I must admit I was a little let down. It was good, and I enjoyed the film don't get me wrong. I liked the fact that it was an unsuspecting musical (or to me at least- I knew nothing about the film apart from the fact that it was Irish and good) so sorry to spoil it for anyone who hasn't seen it- it is a quirky musical,  in a subtle indie folk music kind of way. I enjoyed it  (but A. fell asleep) so not for everyone. If you don't like the sound of Damien Rice then this film may not be for you (thus my husband falling asleep out of slight boredom). Am impressed with what they were able to accomplish  using only a few cameras and little cash. I do think I may just have to go out and buy the sound track, for even though I was little tired of the songs by the end of the film, I must admit waking the next day and wanting to hear them again (particularly the song by the main woman sung while in pajamas walking down the street).
Posted by Juniper at 06:20