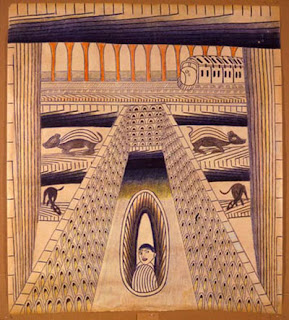 Today, a wonderfully slow mothers day morning (happy mothers day to all you mums out there)  I actually took time to sit on the sofa, cuddle with the kids, leisurely sip coffee and opened the economist for a read....  and something about the description of this artist (only recognised as an artist after his death) struck me, perhaps it is the fact that he is a migrant, maybe it's that trains often appear in his work or perhaps it was the fact that he made art in whatever way he could (for the last 32 years of his life he lived in a mental hospital) . Originally from Mexico he travelled to the states in the 1920's to work on the railroads to support his family. He was a self  taught isolated man.... I found some pictures of his work in a show called Outsider Art. Recently his artwork was gathered and featured in the American Folk Museum - here are a few of his pieces.