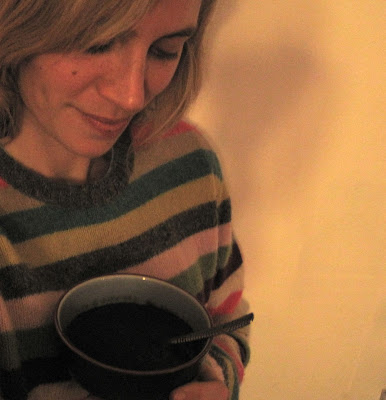 As thunder rumbled across the island last night, rain pounding and the flashes of lightening catching us off guard, we lit candles and enjoyed a cosy evening in. Thankful for out little gas heater, and warming Maltese wine (its around 50 F, 10 C inside these days) and I can't tell you how much I miss central heating. I decided to finally try making imbuljuta which is a traditional chocolate and chestnut soup (sweet). 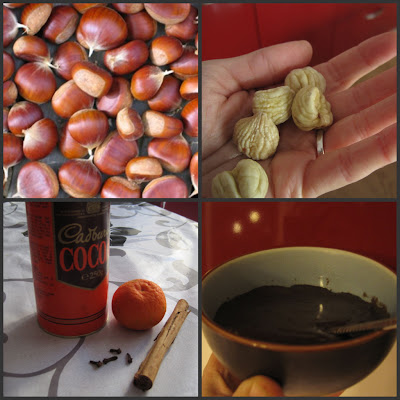 I had been asking my mother in law for weeks to let me watch her next time she made it and at last she did. I must explain that this soup has the most wonderful smell, chestnuts, chocolate, cloves and tangerine peel, and because the soup needs to cook slowly for nearly an hour it has a chance to drift seductively through the house. I was told that it often was made on Christmas eve, so that when people returned from midnight mass they would be warmed by it. I was also told that in olden days when you went to give  a present to a new baby during the winter months they would often serve you this soup as a sign of gratitude, accompanied by small almond cookies.
Having experienced now two winters here in Malta I can see how one would appreciate coming in from the rain to be warmed by a bowl of this. The houses are mostly made of stone here, traditionally a kind of local pale yellow sandstone, which means they keep very cool in the hot summers but the stones ability to absorb the moisture from the air makes the wet days of winter feel extremely cold inside.
My mother in law fondly recounted that when she was a child on especially cold days her mother would make this soup while the house was taking their afternon naps (all seven children), the memory of what it was like to be woken by its smells still very vivid. The joy of coming down together to sit crowded in the kitchen spooning up chestnuts from steaming bowls of chocolate.
The recipe, should you want to try it.

Place all ingredients in pot and let slowly cook till chestnuts are very tender, (about an hour). I strayed form tradition (I do not like the texture of the wet chestnuts so much) and after removing the tangerine peel and cinnamon stick, I blended the soup, so it became a thick dark pudding like texture. I think if it is very thick you could easily serve it with a dallop of fresh cream, if you want to cut the intensity.  Serve hot with a spoon.
Posted by Juniper at 07:50