For the love of Radio 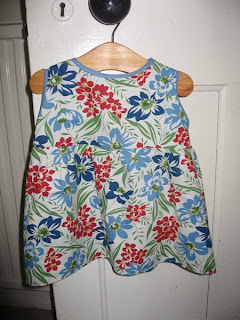 Another very wet day here in Winchester. While Stella napped and the bigger kids were at nursery I skipped spending the morning folding laundry, running errands and organizing dinner to just sit and sew. While doing this I listened to some interesting programs on the radio,  sipped tea and wondered if not sewing from a pattern is such a good idea.
I was impressed with how supportive (of Obama) and clear John Edwards was in the interview on talk of the nation on Tuesday (NPR) and was in awe of just how slimy Jack Gerard, the new head of oil in the U.S. seemed, to me it sounded like he was basically saying - we need to drill in protected areas  but in a very hpney coated way.  He very much reminded me of the main character from the film Thank You for Smoking. Caught as well the program on Fresh Air with the interview of Don Bachardy am now kind of tempted to see the film. Although it wouldn't appear from the outset the relationship between Christopher Isherwood and Don Bachardy was one of true romance ( the thirty year but in the end it did seem to be a real story of love. I for one was moved by the frankness and admiration Don had about the whole relationship.  Did also listen to BBC Radio Four woman's hour program talking about the woman who is trying to save tigers.. a little  fluffy but was entertaining and all in all it was a very nice morning. Feel like I have a lot to ponder over. Ohh do I love radio!
Here is the fruit of my morning- a little summer dress for Stella.
Posted by Juniper at 05:40