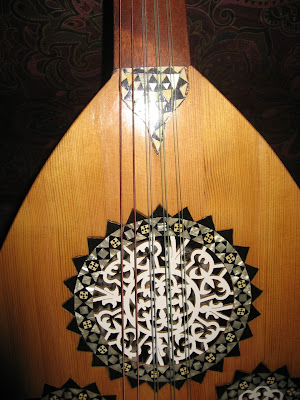 While stopping by my husband's grandmothers old house last week (when I say old I mean more than 400 years, it has closed up stairways connecting to the catacombs under the city leading to the church), a labyrinth of a house, complete with an inner courtyard, an old well and countless rooms. My other half was away so I was asked in his place to stop by and pick out anything I wanted from one of the old upper rooms soon to be renovated, there was not much left in this particular room but two old arm chests (meant for someone else) and some random pieces of furniture (mostly spoken for already). Just before saying good by and thank you I spotted an odd shaped black case in the corner of the room, my husband's aunt had no idea what it was, so we gingerly took it out and carefully unzipped the case to discover a mandolin in perfect condition. She had no idea where it had come from or how long it had been sitting there, neither did any of her brothers or sisters (all seven), she had never seen her father or anyone else in her family ever play such a thing. She has decided to keep the mandolin and hang it on the wall somewhere but I am still puzzled by it, for it seems unlike the Italian Mandolins I have seen and the carved work is so intricate, many little inlayed triangles of mother of pearl, looks far more like something from north Africa.
I did read Captain Corelli's Mandolin many years ago and loved it (never saw the film), but ever since moving here it has drifted in and out of my mind for it's descriptions of the light on the Greek island remind me of what it is like here, and the band clubs where the old men gather, and the dry rocky earth with sparse olive trees....so many small details envoke a similar feel to this island. So this mandolin has for the time being captured my interest. Certain there must be quite a story behind it, one we will probably never know. At the least though I would like to know which country it came from. There is nothing written on it. 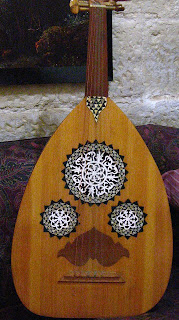