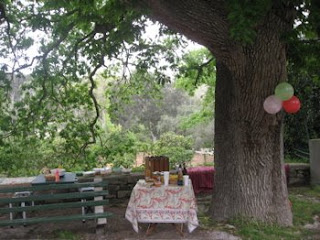 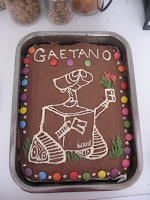 Apparently it was not quiet up to expectations, he was thinking a three dimensional version (yeah right) I may like to bake but am not up to sculpting Wall-E out of cake just yet (especially when time in the kitchen is one long string of interruptions, requests and usually Stella hanging on my leg begging for apricots). The other children recognised who was on the cake and were excited to eat it (all but my son). So a B- on the end result.
Big news in our little house is - we found a small sparrow who had fallen from a nest, he made it through the night and seems to be getting on well with our bird. A and I are so relieved he survived the night... poor little guy must have been missing his family and was shivering last night as it did get cold. I used to help raise abandon birds and small wild animals when I was young but have forgotten some of the tricks of the trade, but trying to get the wee bird to drink at least some drops of water does bring back the memories.
We decided to call him Moses (if he survived the night).
Posted by Juniper at 21:03