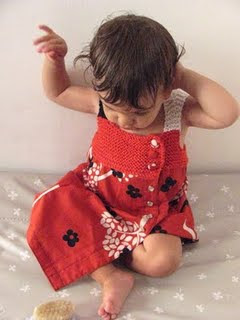 No, I did not make this dress, but my dear friend E. over at My Funny Valentine did, what a pleasure to have met such a talented and interesting friend here - she cooks too! What could be better than a French friend who likes to cook?! Lucky me. She has effectively re-lit that fire of desire to sew again, now to find some time alone... may have to wait till school starts again. Till then I could not resist sharing some of E's lovely creations.
Posted by Juniper at 03:35 3 comments

It's been a year 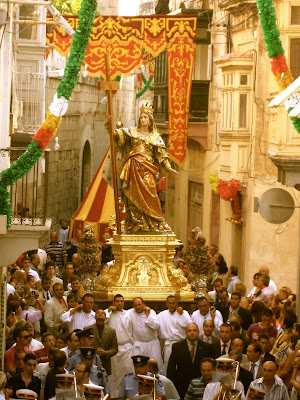 The feast of st. Helena,

This last weekend we celebrated the Birkirkara annual feast, (the town from which A. is from) this photo was taken of the statue of St. Helena making her way round the narrow center streets. It has been one year now since we relocated to Malta, a year ago we were in quaratine with three kids all having chickenpox. Seems in a way far longer than just a year. I have to admit that I still do not feel quiet 'settled'here. But I do feel I have adjusted in ways I did not expect, some things I mocked when first settling here I now see the logic of and some things (like pink sequined mispelled clothes for little girls) still get to me. I have quietly 'mislaid' the corset style bright pink top for my three year old more than a few times.. sometimes gifts are tricky things.

I have grown to like our noisy ally, with it's various standby characters and even feel a growing sort of belonging to our noisy side of Zabbar. Everyone seem to adore little destructo in particular, perhaps that is partially due to her daily 'Bonju' or ÇIAO!' which she says to every person she passes, with a huge grin and great gusto.

The older two seem more settled and are looking forward to the start of school (school starts the first week of October here) so still a ways to go!

I am secretly hoping not to find full time work for a few months so that I can have enough time to sew, plant, run, read and finally begin in earnest again with corresponding by pen and paper to old friends. 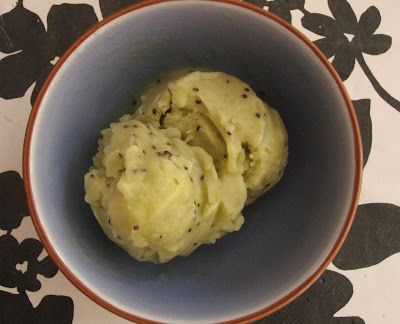 to make you try something new. Can officially say that I am back on the ice cream kick again, this time its fruit sorbet. We had six kiwis I had forgotten about in the fridge and they were just at that soft sort of mushy point that no one really cares to eat, this combined with the fact that I have not been able to find any fresh cream in the small shops in our area combined with the nagging desire to make some new ice cream. So that's what led me to try out making a kiwi sorbet. I followed a great (Jamie Oliver tip) which he used in a lemon sorbet recipe, that being that once you have dissolved the sugar in the boiling water add in a table spoon or two of marscapone, it slowly dissolves and makes for a very creamy sorbet texture. Am very happy with the result. Really refreshing. Next time I make it I would double the proporions, this made only a small pint of sorbet.
Kiwi Sorbet Recipe
6 kiwis (scoop out the insides and puree)
1/3 cup sugar
1/3 cup water
2 Tablespoons Marscapone cheese
A small squeeze of a lemon (to bring out the tang of the kiwis)
First Boil the water and sugar (just enough to dissolve the sugar) then add in the
marscapone, let this cool. Next scoop out the inside of the kiwis and puree, add in the
sugar mixture and about a teaspoon of fresh lemon juice. Pour into the ice cream
mixer and your done. I am guessing you can do this in a freezer container - stirring it
every few hours for a similar effect but have not tried. 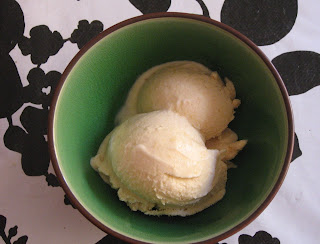 I was on a bit of a it's-hot-and-we-need-some-cool-desert sort of kick and made this second ice cream that we will be taking to Birkirkara today for the St. Helena Feast.
That is a fresh peach and prickly pear (cactus fruit) ice cream. I have been determined to try and make something with the prickly pears, they have an odd texture but have such a nice gentle taste, in the end I ended up using peaches (very ripe and bruised) with some local prickly pear liquor and did this time find some single cream. Here is the recipe (quickly before I forget myself).
Peach Ice Cream
6 very ripe peaches
1/3 cup sugar dissolved in 1/3 cup hot water
250 ml single cream
3-4 tablespoons prickly pear(cactus fruit) liquor pure all together and wirl away in the ice cream machine
Makes a creamy delicate ice cream, like the kiwi sorbet it would go well after Sushi.
Publish Post 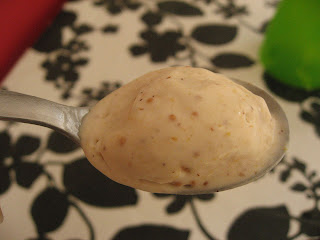 Last but not least, a photo of the fig ice cream, recipe featured on a previous post.
Posted by Juniper at 11:23 2 comments