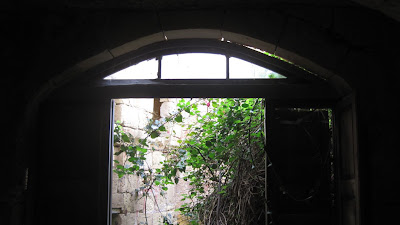 Ever catch yourself doing something a little unexpected?
It happened to me today.
I casually mentioned to the children at lunch that I had not seen Dash around ( Dash being our slightly wild cat), they reported that Papa was saying the same thing earlier. Thus began the Scoobie doo inspired WE'LL FIND HIM response, next you know the trio was scouring every room, every cubbord and closet. My oldest getting more and more worried by the minute, little Destructo meanwhile contemplating perhaps getting a new cat instead or maybe even a puppy.


Next you know my magpie middle child has spotted our wiley feline, he was several rooftops away. 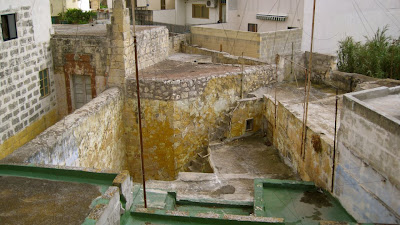 The picture of rooftop mazes shown above was her view. A pitiful meowing dash spotted us a,and came as close as he could and meowed for help. 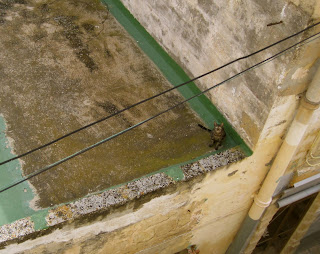 The worried boy child (who is usually drawing detailed airplane pictures) got busy with drawing rescue plans, lots of arrows and boxes and things. Magpie curly top got her shoes on and was out the door in seconds intent on knocking at our neighbours house. Lucky for me she (Magpie)was there, as our very elderly neighbours do not speak a lick of English. She explained our cat situation and before you knew it there were several old people and a few kids near us listening and giving suggestions.
Finally in an attempt to reach the roof top I decided to try from the inside,  I tried to see which house was best to ask to enter and was told about the various empty old houses near where our cat was stuck (that old man died and yes that old woman too and yes that one left for Australian many years ago and no one has heard from him since).  This particular house, the one with the owners who had left to live abroad had one of it's doors half open,  from the outside it looked like it was one small dark dirty room. It is the last door at the very end of the ally and not very inviting at all.
But for a cat in need...we go the extra mile...
so come along with me... into this forgotten home, we must search for the staircase...
(have I ever mentioned that old Maltese houses are like mazes?) 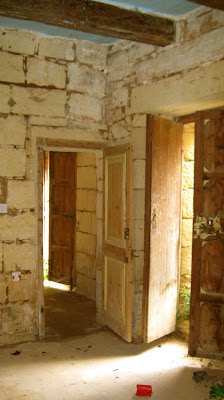 I squeezed in and was surprised to find a small room and then through another small door a very big room with huge 20 foot ceilings and wooden beams (sorry I did not manage to take a photo of this room), everything was covered in dust and vines had curled and twisted their way in the windows and through the old arches facing the garden. 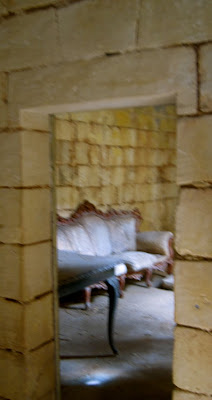 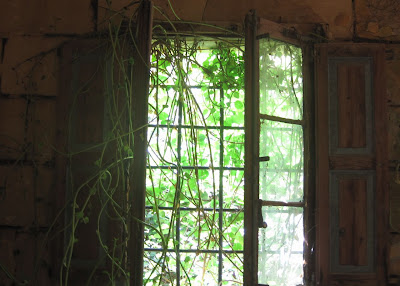 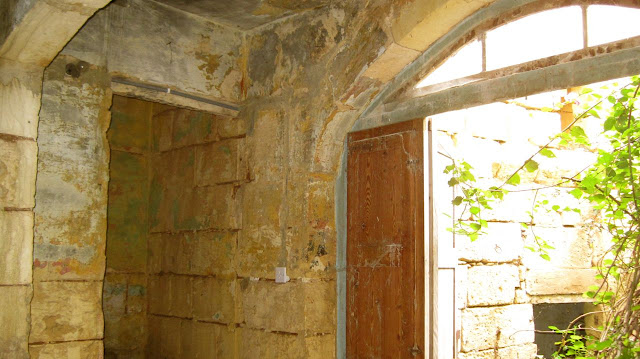 There was a well in the garden, and small nooks carved in the walls of the large room for statues. If our place is old ( just over 300 years old) this place must be very old! Old chairs and a beautiful carved table stood in the corner, I tiptoed through the rooms and finally up a narrow winding stone stairway which eventually led out to a landing which overlooked the hugely overgrown garden. 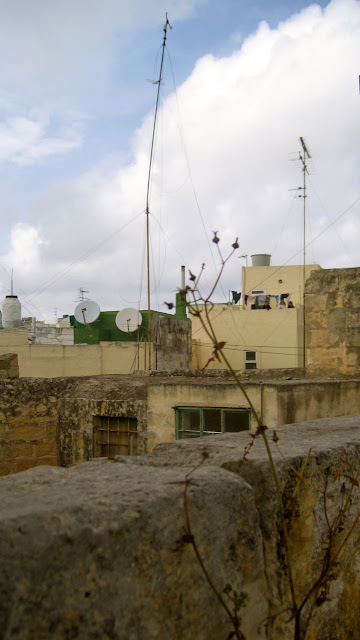 I called for dash but he was two or three roofs away and could not climb over.
(Spot my trio on our rooftop watching me)
Included in this post are a few quickly snapped photos from my phone 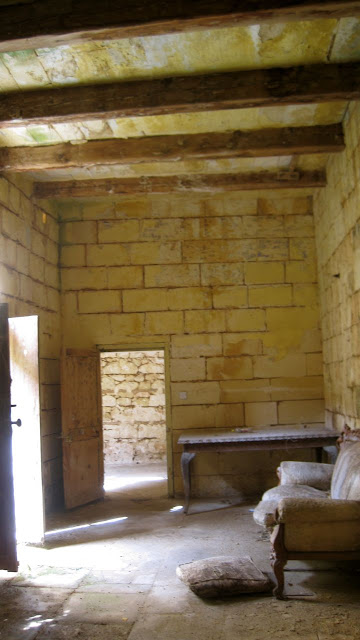 It was a sad somber dinner as thunder rumbled in, wind howled and rain poured down, still no dash. Even with the help of even our rougher neighbours - (ones I had never really spoken to before) but who turned out to be very willing to help, and were up ladders and climbing ledges too as he rain rolled in.
Just before we went to bed though, we heard a soft meowing at the window and found a soaking wet and shivering Dash. He made it home and was very happy to curl up on a warm lap and sleep.
Am left with this odd feeling - thinking about this forgotten house, now when I glance down to the end of the ally I can picture that empty old sofa gazing out at its garden of  vines.
Posted by Juniper at 02:02 19 comments