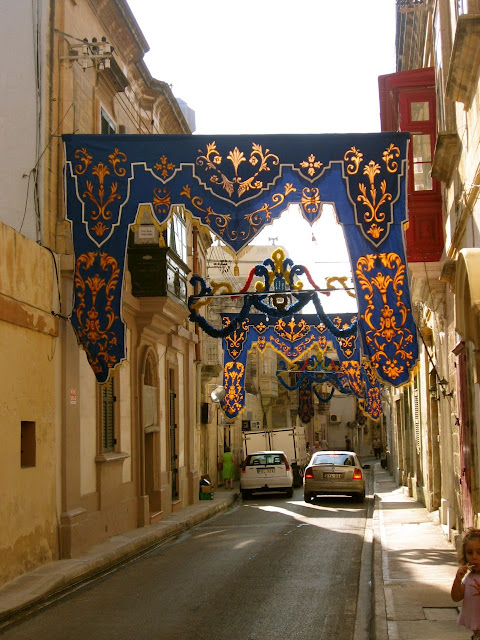 Our street when she was getting all dressed up for the feast. 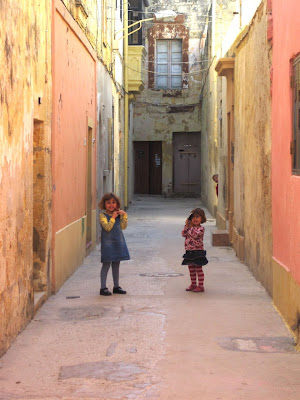 Our nice little run down ally 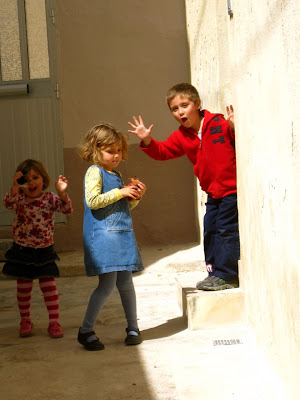 Our stoop plus the gang (who without fail try to run to the end in time to scare us)
Posted by Juniper at 06:54 16 comments

Along with the blue sea,  blossoming peach trees and sun blanched quaint stone streets there is also this side of Malta (I am admittedly overdue in making this post).
This is the view out the car window last week while we were stuck in endless traffic (a bit of rain means flooding in many parts of the island and more than the usual numbers of traffic jams). Lovely industrial Marsa, with its many derelict cranes (gone is the hay day of the Maltese ship building industry). Many pot holed back streets criss-crossing between factory buildings and closed up abandoned old storage houses. I was beginning to fear I may be painting too sunny and perfect of a picture and so was moved to include a few photos that normally I may edit out.
I for the most part in the last year have focused my attentions on the bits of beauty and culture here.  This also helped in my transitioning to the island, trying to find the hidden treasures that make living here really worth while. But this (above photos) is also Malta, lots of construction, lots of traffic... it is the most densely populated country in Europe and because most of the country was built long before cars were invented, there simply is not space for them all. I could go on in this direction, with the many faults one can find here but at the moment I won't spend too much time on that, for I am enjoying this time of allowing myself to be charmed by Malta's rustic worn down beauty and quirkiness.

*I must admit I do rather like some of the old abandoned houses,
such textures and small remains of past glory!
Posted by Juniper at 23:09 6 comments