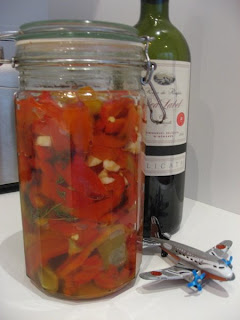 Wish I could say that it is autumn like here with golden afternoon light and changing leaves but alas it's more like odd days of wind and big picturesque cloudscapes  (which I now get to see a lot of when out hanging the clothes on the roof). The trees start to look green, the dustiness ends as the rain finally comes and small areas of  grass can be seen.  Not the Midwestern burst of color and smells that I am used to. Still thoughts of baking and soup recipes start to drift into my thoughts. School days are ahead now (finally) and with that a new gear.
Came across a bag of red peppers for one euro at the green grocer yesterday so thought I would  marinate them to have on hand to throw into salads and on sandwiches. I had a roommate from my Seattle days who used to fill the house with the smells of roasting peppers, every now and again she would be possessed to do as her late Israeli mother used to do -roast and marinate in garlic and   (...sadly I have lost touch with this friend and couldn't ask her what else she used to add),  so decided to throw some thyme in as we had some fresh stalks on hand. It looked almost like a burst of fall colors in a jar to me. Thus the photo.
Also with so many plums around I got a little inspired (yes-ice cream again) this time I made a plum compote with some orange rind and ginger then swirled it into a custard like vanilla ice cream- wish I could remember the exact amounts because it turned out really well-  subtly tart but very creamy. If anyone out there is interested I can write down what I remember.
Posted by Juniper at 05:36