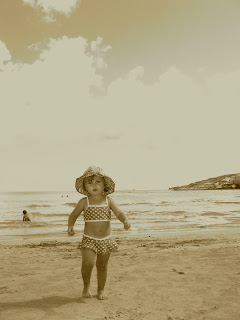 of parenthood sometimes are beyond measure, there are some lows however and today (which should have been my sons first day of  'big kid school' ) was one of those not so joyous days. He and my little destructo are sick with a cold/flu type thing, not pleasant I admit, but I had to go out and do a few errands with them (bread, milk, Medicine and garlic).  Mr. T (who is our most dramatic family member) decided that a small crowded pharmacy would be the best place to stage his dying moment, hands on his throat he gets on his knees and starts yelling- ohhhh I feel a like  I am going to ...BURP, NO NO  I think i am going to THROW UP!!!! I rolled my eyes and tried to have my cash ready to go, being next in line (having seen him 5 min earlier begging to go on the swings and asking for a crackers) I had a sneaking suspicion he was NOT going to throw up (he had also been saying this for the last two hours). Meanwhile little destructo had reached out of her pushchiar and was one by one pulling the bottles of hair conditioners off the shelf, reaching down in a flurry to gather them back up I then turn in time to hand the woman behind the counter the doctors prescription, and ask to buy some hand sanitizer..(maybe it's time to start carrying this in my purse) Bird flu seems to be on everyone's lips lately here. As the pharmacist  is reaching over with it I see the womans face go a little stiff, (this is mind you a minute after my sons throwing up declaration while splayed out on the floor occurred)  to the annoyance and alarm of customers in the que behind me. Just then I look down to see she-who-lives-for-sweets  L. (3) quietly running her mouth (open) along the  counter... so much for keeping the kids free of germs with hand sanitizers! Who knows how long she had been doing this before I noticed her. Yes- we were a spectacle no doubt about it. Never a graceful exist either with three,  trying to reverse a pushchair in a small glass shelved crowded space with a kids holding on to either side, and no one leaning forward to help with the door. I won't bore you with the further adventures of our walk into town but there were many.

p.s. Needless to say little Mr. T never did throw up and today (wed) his fever has gone AND he lost his first tooth! The school will not allow him back without a doctors letter however so back to the pharmacy we go (thats where doctors do their private hours), won't they be happy to see us again!
Posted by Juniper at 22:51