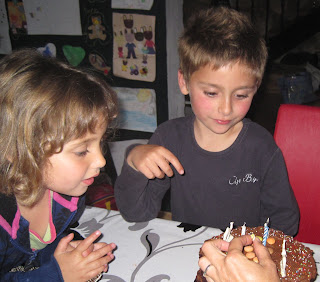 Birthdays
Our little Mr. T (the airplane enthusiast) turned a whopping six this weekend, to celebrate we spent the day at the  beach with family and friends. First swim of the year!


Bottoms
Where to begin.... on Friday we went out to our favourite little Sicilian restaurant, a nice family treat at the end of the week. I think as the world cup nears though even the small family run restaurants are getting decked out in flat screen tvs (I so hate the presence of televisions in restaurants). Especially when they are placed in such a way so that you can not avoid catching glimpses. On this occasion, as we waited for the pizza to come,we noticed all the children where paused (from their drawing on small pads of paper) in mid action .....eyes glued to the tv).


Ok aside from one or two Maltese channels and one or two British channels there are a plethora of Italian tv channels that you get here  and their idea of prime time family entertainment is well.... shocking... I am not sure how to explain it.. to give you a tiny glimpse, I looked up to see a wall of ten ladies asses (in tiny thongs) poking out of a pretend brick wall..as two (older and fully clad) men walked along laughing and talking, the camera gave you close up shots of each and every one of those bums..the men walked along.. apparently it was some sort of quiz show section, guess which ass belongs to which supermodel. This was followed by two dancing barely clad women in black, then a lady topless covered in coloured paint on a table to which the camera zoomed in for what felt like a very long time on this woman's breasts, .. as they touched her to see her jiggle... my jaw was hanging open at this point..then the lady in flowers (shown below). 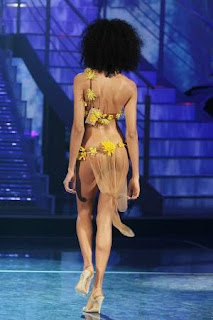 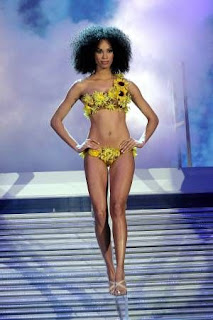 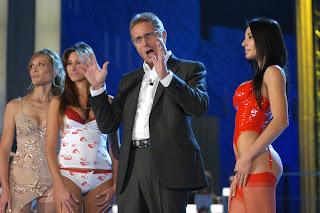 I tried to put a spin on it and say the ladies were getting ready to go swimming and then my 4 year old daughter said no mama I think those ladies want to be famous and rich....this is after less then 10 minutes of exposure... I can't imagine what seeing this kind of thing day in day out does to young girls and boys??!!  I really found it disturbing. The show was called Ciao Darwin. 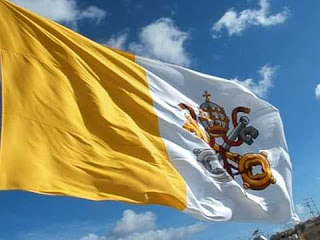 Flags
The Pope was here in Malta this weekend and the country was at a standstill with excitement and anticipation. I noticed as we drove to the beach that there was a sea of big yellow and white flags above the housetops, ..what flag is that?
"Thats the Pope's flag" my husband said casually.
"What, like he has his own flag? "
"Yep"
"And people just have it at their homes normally just in case he comes to visit?"
"yep"
Two notes here, these are not small flags but in many cases maybe a good 15 feet by 8 feet and there were hundreds all over the island.
Secondly the same thing happened on Easter but the flags were red and white... apparently in Malta most people have between 4 and 6 large flags (and obviously flag poles on their roofs). The Maltese Flag, The Virgin Mary flag, the local village flag, the village saint flag and now I have learned that they have the Pope's flag too. 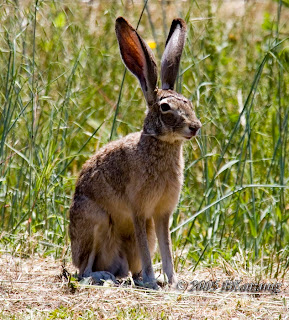 Fenek
Last but not least- Fenek which means Rabbit in Maltese
I must admit that of late life here does feel for the most part 'normal', I have adjusted to the daily routines and the sounds of church bells, and the fresh bread and fish trucks honking as they pass through  but then there come little things that strike me and I realise that yes I am living in a very different world to the one I grew up in. This happened on Saturday.
A lady came to the door, I was hanging laundry on the roof,  and the next thing my husband is coming up to me tell me he has bought a rabbit and he was jumping in the shower so when she comes to give her the money  ".. excuse me?"  I asked... (thinking oooh perfect a nice little pet rabbit for the children), he said "yeah and she asked if I wanted it with the skin on or not... "
eeeek went the ex-vegetarian in me... ok ok.. yes a poorer nearby farmer woman offering rabbits.. of course we should buy one... a few minutes later she rang the bell and handed me a bag, she said it was still warm so not to put in the fridge just yet.. she had some blood splattered on her shirt.. I smiled but my stomach completely turned.... in that 10 min she had gone and killed this little rabbit... for us...
and knowing my husband was looking forward to cooking it in a new way, with fresh fennel, white wine and garlic .....made getting away from the reality hard to avoid... gulp...   yes.. a different world.


I suppose it is better this way... you are not protected from the reality of what you are doing but still ... I had trouble eating the meat ...I felt so guilty. It did turn out well... and with some roasted baby potatoes, carrots and shallots it was  true Sunday roast sort of meal.. I should have taken a picture.... but I still felt sad about it.
It didn't help that I had just finished making the girls two little toy rabbit dolls.
Sorry this post really did get long!!!!
Posted by Juniper at 00:03